gautengensis in the sediba phylogeny (click to enlarge)
I've highlighted the taxonomic units that Curnoe referred to Homo gautengensis. Note that, by Berger & al.'s phylogeny, Homo gautengensis is polyphyletic. Each of those units represents a single specimen, so this could potentially be explained by individual variation, age differences, sexual dimorphism, etc. Or the new species is overextended—I'm not really qualified to judge.
Note also that Homo is polyphyletic in this phylogeny. One way to fix this is to move sediba into Homo.
Posted by Mike Keesey at 3:29 PM 3 comments:

A Homo gautengensis by any other name...

A new species of our genus, Homo, was recently published:


The southern African sample of early Homo is playing an increasingly important role in understanding the origins, diversity and adaptations of the human genus. Yet, the affinities and classification of these remains continue to be in a state of flux. The southern African sample derives from five karstic palaeocave localities and represents more than one-third of the total African sample for this group; sampling an even wider range of anatomical regions than the eastern African collection. Morphological and phenetic comparisons of southern African specimens covering dental, mandibular and cranial remains demonstrate this sample to contain a species distinct from known early Homo taxa. The new species Homo gautengensis sp. nov. is described herein: type specimen Stw 53; Paratypes SE 255, SE 1508, Stw 19b/33, Stw 75–79, Stw 80, Stw 84, Stw 151, SK 15, SK 27, SK 45, SK 847, SKX 257/258, SKX 267/268, SKX 339, SKX 610, SKW 3114 and DNH 70. H. gautengensis is identified from fossils recovered at three palaeocave localities with current best ages spanning ~2.0 to 1.26–0.82 million years BP. Thus, H. gautengensisis probably the earliest recognised species in the human genus and its longevity is apparently well in excess of H. habilis.

The holotype, Stw 53, has previously been referred to either Homo habilis Leakey & al. 1964 or Australopithecus africanus Dart 1923. Interestingly, though, one of the paratypes, SK 15, is already the holotype of Telanthropus capensis Robinson 1949! So Homo gautengensis would appear to be a junior subjective synonym.

It gets even more interesting (for us nomenclature buffs, anyway): if Telanthropus capensis were to be transferred to Homo, then it would be a junior homonym of Homo capensis Broom 1918 (a.k.a. "Boskop Man"), which itself is a junior subjective synonym of Homo sapiens (the type specimen probably representing an early Khoisan individual).

I'm not sure if any of this is discussed by Curnoe, because I don't have access to the paper. If anyone has a PDF, feel free to e-mail to keesey [at] gmail [dot] com.

UPDATE: I have the paper now and will be looking it over.

ANOTHER UPDATE: Telanthropus is mentioned in passing, but the synonymy is not discussed.
Posted by Mike Keesey at 10:38 AM 5 comments:

I'll also be presenting Names on Nodes at iEvoBio, at the Software Bazaar on June 29. Here's the abstract:


Names on Nodes: Automating the Application of Taxonomic Names within a Phylogenetic Context

Names on Nodes1 is an open-source2 Flex application which utilizes a mathematical approach to automate the application of phylogenetically-defined names to phylogenetic hypotheses. Phylogenetic hypotheses are modeled as directed, acyclic graphs, and may be read from bioinformatics or graph files (Nexus, NexML, Newick, and GraphML) or created de novo. Hypotheses may also be merged from multiple sources. Names on Nodes stores hypotheses as MathML, an XML-based language for representing mathematical content and presentation. Phylogenetic definitions may be constructed using a visual editor and exported in MathML. Thus, it is possible to create a dictionary of defined names and automatically apply them to phylogenetic hypotheses. In the current version of the application, such dictionaries exist only as MathML files, but in future versions definitions may also be loaded from databases (e.g., RegNum).

Additional functionality in Names on Nodes includes the ability to coarsen a phylogenetic graph (thereby simplifying it while still reflecting the overall structure) or to export it as an image file (raster or vector, potentially with semantic annotations).

I'll be giving a “Lightning Talk” (five minutes) at the iEvoBio Conference in Portland, Oregon. Here's the abstract:

Toward a Complete Phyloreferencing Language


A phyloreference is a statement indicating a taxon within a phylogenetic context. A common use for phyloreferences is in phylogenetic definitions, which tie taxonomic names to taxa via such statements. Several conventions for writing phyloreferences have been proposed, but most only cover a few “standard” forms (node-, branch-, and perhaps apomorphy-based clades) without the capacity to represent more “exotic” forms (e.g., ancestor-based clades and qualified/modified references). In order to build a complete phyloreferencing language, the mathematical underpinnings of phylogenetic contexts must be clarified. A phylogenetic context may be modeled as a directed, acyclic graph, wherein nodes model taxonomic units and directed edges model immediate descent. Higher taxa are modeled as unions of nodes. A phyloreferencing language must minimally allow for certain classes of entity: Boolean values, sets (including taxa, relations, and the empty set), and lists (including graphs and functions). It must also minimally allow for basic operations related to logic, set theory, and graph theory. Higher structures such as declarations and piecewise constructs must also be possible. With these as a basis, functions related to phylogeny can be defined: maximal, minimal, predecessor union/intersection, successor union/intersection, exclusive predecessors, synapomorphic predecessors, clade, crown clade, and total clade. I show how such a language may be used to represent various types of phyloreference, both “standard” and “exotic”.

Now to figure out how to condense that into a five-minute talk....
Posted by Mike Keesey at 12:36 PM 4 comments:

Yesterday I transferred the list of remaining Names on Nodes issues from my whiteboard to the bitbucket issue tracker. My goal is to get through most of these by the end of June. (Some "nice-to-haves", like DOT or HTML 5 exporting, may have to wait.)


DISPLAY
NAMES
NODES
DEFINITIONS
OTHER
Posted by Mike Keesey at 3:42 PM No comments:

Why HTML 5 Canvas Will Not Be Replacing Flash That Soon

Previously I mentioned a tool, PhyloPainter, which uses the HTML 5 <canvas> element to draw a phylogenetic graph. Here's what it looks like on my iPhone: 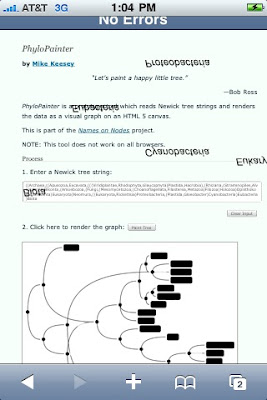 Not only are the arrowheads missing (as they are on Safari on all platforms, not just the iPhone), but the labels have bizarrely been placed outside the canvas, flipped upside-down! The tool works fine on Firefox and Chrome. (Internet Explorer has not implemented <canvas> yet, and I haven't played enough with the interim solution, ExplorerCanvas, to get it working.)

I think the <canvas> element is a cool idea, and I'll continue to play with it. But it has a long way to go to compete with a cross-platform tool like Flash. HTML 5 may be "open"—but it also needs to "work".
Posted by Mike Keesey at 7:23 PM No comments:

The whole Flash/Apple fracas has been rather distasteful to me. But I'm not going to dwell on that right now. Instead, I am trying to keep an open mind by trying out some of the technologies that are competing with my favored development tools. First up: HTML 5.

I'll probably write more on the topic later, but suffice to say for now that working HTML 5 feels like I've traveled in time back to 2001, the days of ActionScript 1.0. JavaScript is a poor language for anything complicated. Canvas has covered the basics of vector drawing well, but little else. That said, I see potential and I'm pretty certain the tools will improve.

For my first HTML 5 app, I ported some basic functionality from Names on Nodes, namely, the ability to read Newick tree strings and the ability to draw graphs. I give you:


PhyloPainter
It's a bit rough right now. For one thing, it doesn't work in Internet Explorer (despite the inclusion of a workaround JavaScript tool—the current version of IE doesn't support HTML 5 Canvas). But it's a start.

Give it a try—paint some happy little trees!
Posted by Mike Keesey at 10:30 AM No comments: