The Evolution of Cranial Capacity in Humans and Stem-Humans

Here's a chart I've been working on for a while:

This shows all known human and stem-human individuals, plotted according to stratigraphy and cranial capacity (endocranial volume). The fossil individuals with known cranial capacity are highlighted as white circles; other fossil individuals' probable capacity is inferred from these. The "chimpanzee range" shows the span between a normal female bonobo chimpanzee (Pan paniscus) and a normal male common chimpanzee (Pan troglodytes) (Begun & Kordos 2004); the full range for chimpanzees (Pan) is slightly larger (but not much). The "human range" shows where about 90% of living humans fall (Burenhult 1993). UPDATE: My mistake, it's the range of ~90% of living humans combined with the range of Upper Pleistocene humans (which is actually higher, on average).

Deeper Dive on the PhyloPic T-shirt

In this post I'll go into more detail about what, exactly, is on the shirt, starting with the final silhouette and going back in time. In each entry, the taxonomic name links to a page for the image, with artist and license information. Some terminology first: "concestor" means "most recent shared ancestor", and "stem-X" means "not X, but more closely related to X than to anything else alive".

The final silhouette is a modern human, Homo sapiens sapiens, specifically a Melanesian woman. Melanesians and other Oceanians represent one of the furthest migrations of humanity from our original geographical range.

Immediately behind her is another Homo sapiens sapiens, this one a Subsaharan African man. Subsaharan Africa is the wellspring of modern humanity. (This isn't meant to imply an ancestor–descendant relationship between the two figures; they're just coexisting members of the same subspecies.)

Read more »
Posted by Mike Keesey at 8:00 AM No comments:

Half a Billion Years in the Making: The PhyloPic T-shirt

Yes, now you can wear PhyloPic.

PhyloPic's silhouettes are free, but hosting the site costs money. With this shirt, I'm trying to raise enough to cover basic expenses. If 100 of you buy a shirt, you will cover PhyloPic's hosting for the next two years.

The design uses PhyloPic silhouettes to depict the evolutionary lineage of humanity, starting with the earliest bilaterian animals. All of the silhouettes are public domain, or available under a Creative Commons Attribution or Attibution-ShareAlike license (which means the design itself is under a Creative Commons Attibution-ShareAlike license). The works of ten artists are featured:


The shirt is only available through March 15. As of this morning, 25 shirts have been purchased, meaning that we are exactly one quarter of the way to the goal. So help PhyloPic out, and get a great T-shirt! Or, if you can't*, at least help spread the word.


* Apologies, but shipping is only available in the U.S., Canada, and Army or Fleet Post Offices. But if this campaign does well, I'll certainly look into a more global option for future shirts. (Yes, plural. Why should Homo sapiens get all the fun? PhyloPic has good coverage of many other lineages.)

The PhyloCode Has a Deadline

As most of you probably know, the PhyloCode (more verbosely, the International Code of Phylogenetic Nomenclature)  is a proposed nomenclatural code, intended as an alternative to the rank-based codes. It was first drafted in April 2000, and at that time the starting date was given as "1 January 200n". On this date the code would be enacted and published along with a companion volume, which would provide the first definitions under the code, establishing best practices and defining the most commonly-used clade names across all fields of biology.


Well, the '00s (the zeroes? the aughts?) came and went without the code being enacted. The hold-up was not the code itself, which has been at least close to its final form since 2007. (The last revision, in January 2010, was minor.) And it hasn't been the software for the registration database, which has been completed. The hold-up was the companion volume, which turned out to be a much more daunting project than expected. (And considering that the zoological code took 66 years to go from being proposed to being published, perhaps the initial estimate should have been hedged, anyway.)

At the 2008 meeting of the International Society for Phylogenetic Nomenclature (ISPN), this problem was discussed. It was decided that the companion volume should be narrowed in scope. Instead of waiting to get definitions for commonly-used clade names across all fields of biology (many of which did not even have willing authors), entries would be limited to those already in progress. Later on, a revision was also made to the editorial process to help speed things up.

Now for some news: at the website for the ISPN (recently revamped by yrs trly), there is a new progress report for Phylonyms, the companion volume to the PhyloCode. There will be at most 268 entries. Currently 186 of those (over two thirds) have already been accepted. The rest are at various stages of review. But perhaps most excitingly, there is a deadline:


The contract with University of California Press calls for the manuscript to be submitted by September 1, 2014.

Yes, folks, we will see the PhyloCode enacted in our lifetime! (Pending nuclear holocaust or alien invasion.)

Genus names are stupid. They have two jobs, and they do them both poorly:

They do #1 poorly because they're defined typologically. The definition for a genus is just, "Some taxon that includes the type species." But they could do this task well if they were given phylogenetic definitions instead.

But that doesn't work, either, because it conflicts with #2. Taxa defined by phylogenetic definitions may overlap, or be empty. For #2 to work, every single species has to be part of one genus (and only one genus). Phylogenetically-defined taxa don't really work that way.

So genus names are stupid. But we have to use them, because there's no other system for naming species.

Because they refer to taxa poorly, different disciplines often have wildly different ways of using genus names. In entomology, a genus may have hundreds of species. But, increasingly in dinosaur paleontology, each genus gets one species. Nearly every single Mesozoic dinosaur genus is monotypic.

This is a pattern we see over and over in recent years:
Today's researchers do have an excuse prepared for #3. It goes like this:
Ignoring the mild egomania in #2, this sounds reasonable enough. But this way of thinking has given us a huge number of completely redundant names, as well as pushing dinosaur paleontology into an extreme corner of the "splitter vs. lumper" debate. Isn't there a better way?

There Is a Better Way

Just give your species a new subgenus!

Now, as long as O. noobius continues to be regarded as the sister group (or otherwise "close enough") to O. oldschoolensis, you just keep the status quo. But if things get shaken up and O. noobius requires a different genus name, by the rules of the ICZN, it has to be Newguy. And you still get the credit!

The recent surge of activity as PhyloPic neared its 1000th image got me to wondering about the pattern of image submissions over time. Fortunately it's very easy to collect this data using the PhyloPic API.


Step 1. Determine the number of submissions.


This is a very simple API call:
http://phylopic.org/api/a/image/count


Step 2. Pull down the submission time data for all images.


Now that we have the total number, we can grab data for all of the images at once, like so:
http://phylopic.org/api/a/image/list/0/1024


Once you have this, it's a pretty simple matter for a JavaScript programmer to strip out the month and tally the images. I did this and generated a bar chart using Google's Code Playground. Here it is: 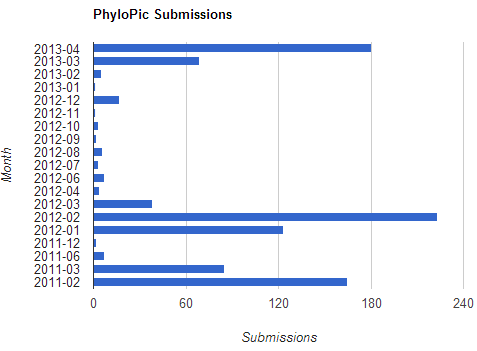 (I left out May since it's not over yet. Apologies for the gaps.)

PhyloPic was officially launched on 21 February 2011. Most of the submissions for that month are ones that I "presubmitted" during development. (A lot are from Scott Hartman's skeletal drawings, including the very first submission.)

Submissions were strong going into March but then completely slacked off. I'm sure a lot of this was due to technical problems — the site became incredibly slow after a while. There were major architecture flaws.

I (mostly) fixed these and relaunched in January 2012. Interest was strong, and in February PhyloPic had its best month ever. But then submissions slacked off again.

A year later, in March 2013, I was getting ready to do another major upgrade. I added dozens of images in anticipation. Then I relaunched at the very end of the month. Sure enough, April was one of the best months ever, second only to February 2012.

May 2013 is currently going strong, but looking at this trend I start to wonder: how long will it last? And although I recently swore off doing massive updates, are they actually better for driving up submissions?
Posted by Mike Keesey at 11:48 AM No comments:

Just a little while ago, PhyloPic reached its first 1000 silhouettes! Here's the thousandth, the eusauropod dinosaur Cetiosaurus oxoniensis, by Michael P. Taylor:

Several contributors seem to have all been vying for the spot. Around the same time we got some other lovely contributions. Gareth Monger contributed this upside-down butterfly, Aglais urticae:


He missed the 1000th spot and got 1002nd. Matt Martyniuk missed it on the opposite side, with this Lambeosaurus (hadrosaurid dinosaur) at 993rd:

Emily Willoughby got quite close, too, and intended this rather recognizable angiosperm leaf (Cannabis sativa) for the 1000th spot. Alas, it's 1007th:
(As she noted, 420 would have been a good number as well.)

Thanks to everyone who contributed to the first thousand silhouettes! It took two years to get here — may the next thousand be even faster!